Haridwar has very rich and old religious and cultural heritage. Sited in the foothills of the Himalayas, Haridwar is a tourist hot-spot. In haridwar you will see a great statue of Shiva at the fork of the river. If you are there for a short visit, it is beyond doubt worth to visit the temple on top of the mountain, with a breathtaking view.

The clear blue sky, the glimmering mountains on the horizon and the murmur of River Ganga, is too irresistible an attraction. Haridwar Sightseeing Tour including those only those places of Haridwar city, which are famous by vacationer or tourists. Haridwar has some very interesting places which you must visit. 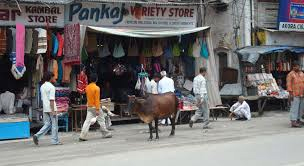 Bara Bazaar : On the north-side of the canal, between Har Ki Pauri and the Upper Road, is multi-colored Bara Bazaar. Along with the spiritual paraphernalia or prasaad (foodstuff offered to the gods, photos of the deities, religious pamphlets etc) are scores of tiny stalls crammed along both sides of bazaar selling an variety of goods including shawls, brassware, glass bangles, wooden whistles, bamboo canes and can baskets. 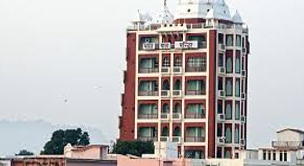 Bharat Mata Temple : Sited in Sapt Sarovar near ashram of Haridwar, Bharat Mata Temple is a holy place of its own kind. Bharat Mata Mandir was founded by Swami Satyamitranand Giri. On 15th May 1983, the temple was instated by Late Prime Minister, Smt. Indira Gandhi. The temple is also unique in the sense that it is built in 8 stories, each of which represents a specific theme and is devoted to various legends and deities of India. The eight-storey temple rises up to a height of 180 ft. 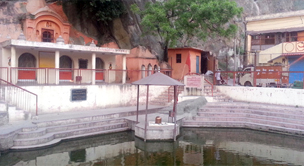 Bhimgoda Kund : Haridwar Bhimgoda Kund enlightens the travelers on the rich religious heritage and mythological legacy of the bygone golden time. Legend has it that while the Pandavas were here, Bhim with one blow of his horse's hoof drew water from the rocks at this spot. 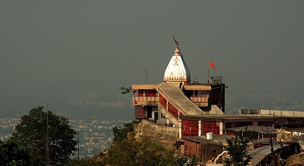 Chandi Devi Temple : Temple of Chandi Devi a top the Neel Parvat on the other bank of river Ganga was build in 1929 AD by the King of Kashmir – Suchat Singh. The temple is a 3 kilometer trek from Chandi Ghat. Legend has it that Chanda-Munda the army chief of the local demon king, Shumbha-Nishumbha, was killed by Goddess Chandi here after which the place got the name Chandi Devi. It is believed that the main statue was established by the Adi Sankaracharya in 8th Century AD. Chandi Devi Temple is now accessible by a rope-way also, which starts near Gauri Shanker Temple. 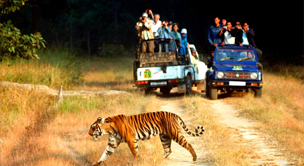 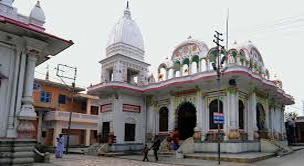 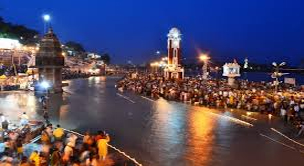 Har Ki Pauri : Har-Ki-Pauri is the sacred Ghat was constructed by King Vikramaditya in memory of his brother Bhartrihari. It is believed that Bhartihari eventually came to Haridwar to meditate by the banks of the holy Ganga. When he died, his brother constructed the Ghat in his name which later came to be known as Har-Ki-Pauri. This sacred bathing ghat is also known as Brahmakund. The reflection of golden hues of floral diyas in the river Ganga is the most enchanting sight in the twilight throughout the Ganga Arti Ceremony. It is the main ghat on the river Ganga, where a holy dip is a must for every devotee. 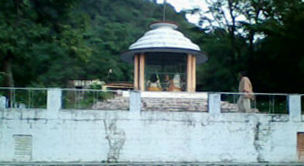 Kanva Rishi Ashram : Kanva Rishi Ashram to be found on the banks of the river Malini 42 kilometres from Haridwar is believed to have been the site of the hermitage of Maharishi Kanva. Although not a Saptarishi, the sage is generally believed to have authored some of the Vedic mantras. He is more famous as the sage who raised Shankuntala Vishwamitra's daughter and her son Bharata. 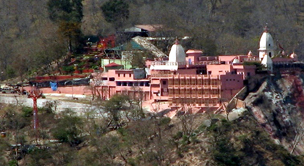 Mansa Devi Temple : Mansa Devi temple is located atop the Shivalik Hills. Goddess Mansa Devi, wife of the Nag King Vasuki, is believed to complete the wishes of devotees visiting her temple. To look for the blessings of the Goddess and get their wishes pleased, the devotees tie sacred threads on the sacred tree that stands proud in the temple premises. Once the wishes are fulfilled, the devotees mark value by returning to the tree to untie the threads. A charming view of Haridwar awaits those visiting this temple.

Maya Devi Temple : One of the Siddhapeeths of Haridwar and a vertex of the Siddhapeeth triangle formed between Mansa Devi, Chandi Devi and Maya Devi temples, this temple dates back to the 11th century. It is believed that the heart and navel of Goddess Sati (first wife of Lord Shiva) fell in the premises of this very old temple. Goddess Maya Devi, the Adhisthatri deity of Haridwar, is recognized to be an incarnation of power or shakti. A visit to Haridwar is partial without seeking the blessings of Goddess Maya Devi. Maya Devi temple is the 3rd very old temple of Haridwar still intact, apart from Narayani Shila temple and Bhairav temple. 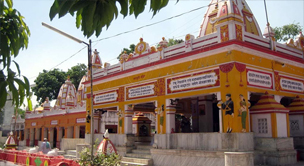 Sapt Rishi Ashram : Soham Swami was a big spiritual leader and yogi of India. He was in this world previous to the 1st part of the 20th century. His actually name Shyamakanta Bandopaddhyaya. He was Advaita Vedantic follower of Tibbetibaba. Tibbetibaba was a big yogi and maharishi of India. Soham Swami built an ashram named as Soham Ashram in both in Nainital and Haridwar. He was born at Autsahi in Dhaka. 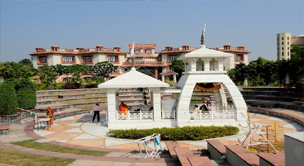 Shantikunj : Shantikunj is the headquarters of the spiritual and social organization All World Gayatri Pariwar. Recognized in 1971 at Haridwar, it has emerged over the years as a center of the global movement of Yug Nirman Yojana for moral-spiritual regeneration in the light of hoary Indian heritage. Sited at the bank of holy Ganges and between the Shivalik ranges of the Himalayas, it's also a place of attraction for tourists and seekers of spiritual guidance.